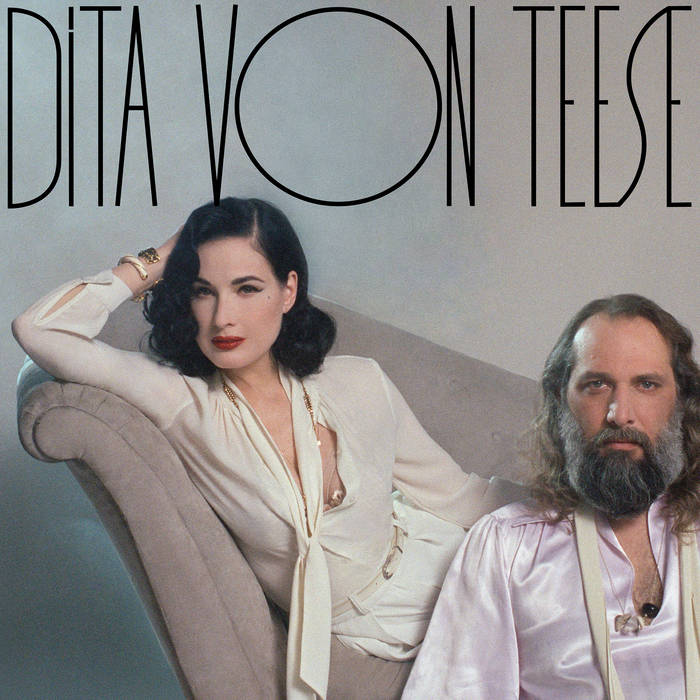 Elryc Bathory So good! Thank you for this can't wait for the next one!
Yes I expect you to do this again. Favorite track: Parfum.

steveinsocal "...while Sébastien Tellier magnificently orchestrates just about every facet of this album - producer, songwriter and on the magnificent "Porcelaine", vocalist - it's that glint of Charlotte Gainsbourg in Dita Von Teese's at times breathless vocals which begs the listener to sit up and take notice..."

Who is Dita Von Teese, whom this album tries to portray? An expert in the art of kindling desire who has revived the art of American Burlesque? An international cover girl who inflames the imagination of fashion gods and photographers? A lingerie designer and shrewd business woman? A lone wolf in the Los Angeles night whispering enigmatic confessions on a long forgotten answering machine?

Alabaster face and cherry red lips, curves often outlined by a black satin sheath, Dita Von Teese sings about the power of seduction and the ecstasy of letting go in an album bearing her name, written and composed by Sébastien Tellier. “I’m not a professional singer, in fact, I’m quite uneasy about recording my voice. But I do enjoy the thrill of doing things that are outside of my comfort zone, so in the past, I’ve collaborated with artists I admire that have invited me, such as Monarchy and Die Antwoord” recalls the Michigan native whose Mona Lisa smile betrays German, Scottish and English origins. “But nothing compares to this project with Sébastien Tellier. Having been a fan of his music for a long time, I would go to see him play live in California and, when I performed for the first time at the Crazy Horse in Paris, I invited him because I was such a fan, not daring to imagine that someday he would compose an entire album for me. When we began recording, he offered to let me to write some lyrics, but I preferred the feeling of letting go, of making a Sébastien Tellier record. I had a fantasy about having a modern Brigitte Bardot and Serge Gainsbourg moment. To describe the album is difficult; perhaps it’s me with less make-up. At times, there’s a certain vulnerability which stands in contrast to my stage image of a confident and glamorous woman. I would never dare say such things in real life, and if I ever really felt like making such declarations of love, I would likely restrain myself right away."

For his part, Sébastien Tellier has long dreamt of composing for a woman, but was not inspired by any of the professional singers. “I was looking for someone both beautiful and unique. When I saw Dita dance to a piece of music I had written for her, I had a feeling that her physical presence and her personality were a perfect fit with my music and I started to compose only for her. Dita reminded me of Snow White, because she has the freshness of a cartoon character. But when I saw her arrive at the studio in her black Mercedes, I understood that she was a ghost. Observing her, always smiling, available, I thought of mermaids, shells, mother of pearl objects and of marble. My wife, Amandine de La Richardière, wrote some sexy pop lyrics to balance the melodrama of my tragic vision that love always ends - in my songs - in bitterness and regret. After having worked with Dita, I can say without exaggerating that she’s a fantasy factory. In the sense that when you think that you've finally pierced her mystery, she turns out to be more than ever, a creature of dreams, totally out of reach.”

Recorded in Sydney, Los Angeles and Paris, “Dita Von Teese” owes much to the talents of composer Sébastien Tellier, the singing of Dita Von Teese and the art of two instrumentalists—the programmer and keyboard player, John Kirby, famous for his work with Solange, Blood Orange, and Money Mark, and Daniel Stricker, the drummer of the Australian group the Midnight Juggernauts—who coproduced the album with Sébastien Tellier, under the name of Mind Gamers.

Who could remain unmoved when listening to the sound of this melancholic priestess explaining, on an old merry-go-round melody that “Life is just a game” (“La vie est un jeu”) and, like a safe that one thought unbreakable, suddenly lets out all of her secrets?

Woven with powerful heartbeats, waves of liquid pianos, guitars cracking like whips, Chinese sounding motifs and synthetic steel drums, “Dita Von Teese” asks to be lured into its intoxicating wake, as if the singer who had crossed invisible and tormented worlds had found the path leading to divine ecstasy.

Does love exist? Is it the name given to the endless repetitive nature of desire operated in action as in the remembrance of it? Playing freely with codes and trends, this suave and languid album has an exhilarating charm. The charm of a mirage, which, having barely appeared, vanishes in a flash.

Dita Von Teese, performing striptease since 1992, is the biggest name in burlesque in the world since Gypsy Rose Lee, and is credited with bringing the art form back into the spotlight with a new sense of elegance and sophistication.
Sébastien Tellier saw her dancing once on one of his tracks during her show at Paris' Crazy Horse, and he decided to compose an album only for her... ... more

Bandcamp Daily  your guide to the world of Bandcamp